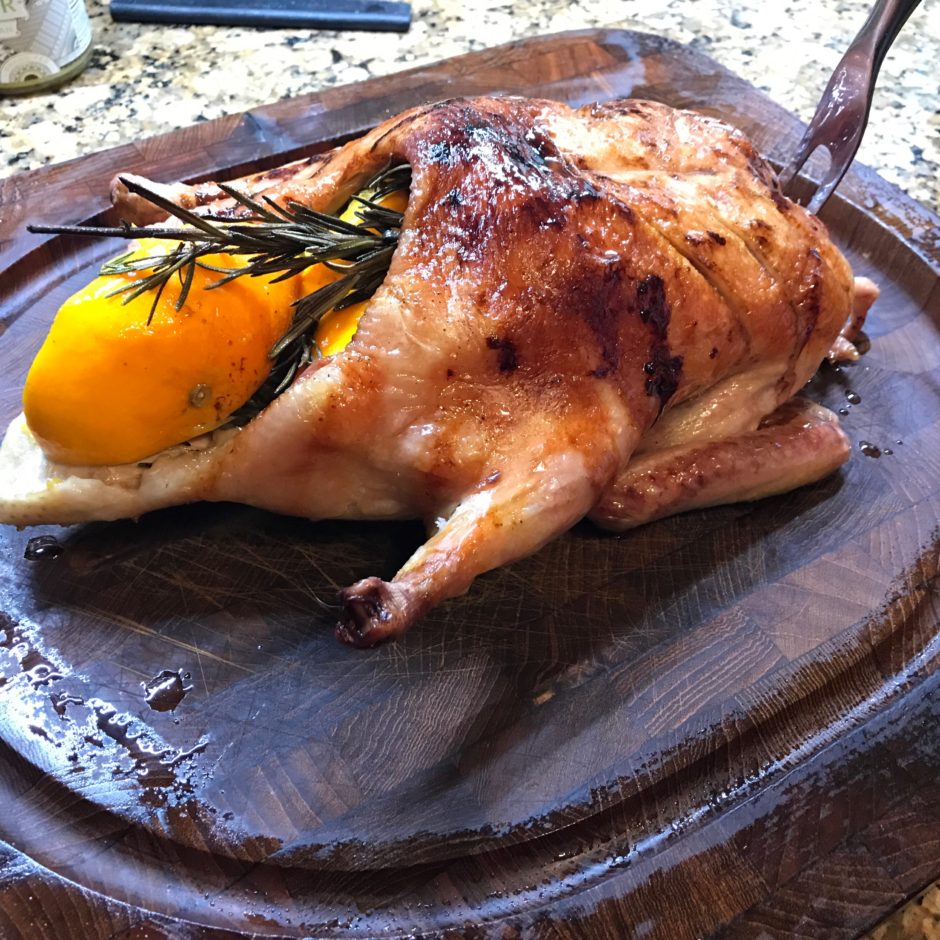 One of my favorite things to make for dinner is a roasted duck. Doing a roasted bird for dinner is great, because it doesn’t take much active time. Unfortunately, chickens can be a bit too large to feed just the two of us, and it isn’t the most flavorful poultry. I’ve written before about the benefits of duck over chicken in terms of the nutritional profile, but I also think it tastes better. A roasted duck is also the perfect portion for two people to share for dinner, and the leftover carcass makes amazing broth.

The Art of Roasting a Duck

Duck is an intimidating bird to work with. Since ducks are water birds, they have a thick layer of fat underneath their skin, to help insulate them against the cold. This fat is liquid gold when rendered down, and used to cook with, but annoying and chewy on your dinner plate. The first time I made roasted duck, I was surprised by how difficult it was to get the skin nice and crispy, and render down that subcutaneous fat. I was hoping to produce something like a Peking duck, and ended up with something like bazooka Joe.

If you want to render down the subcutaneous fat, without over cooking the meat, you need to cook it low and slow. Most duck recipes call for several hours in the oven, at about 300 degrees. That, just doesn’t work for me. Not only is that just way too long on a weeknight to wait for dinner, but our apartment is so small, we really can’t have the oven on that long. If we roasted a duck for a few hours in our apartment, we’d need shorts and tank tops to make it bearable. This recipe can be done in an hour, and will still result in a delicious duck. There will still be a slight layer of fat beneath the skin, but it will still be succulent and juice with a crispy skin.

The first thing I do with my duck is clean it. To do this, remove any of the gizzards and the neck from the cavity. You can keep these, and freeze them to use later for making broth. Then, using a sharp knife or kitchen shears, cut away any of the excess fat and skin around the cavity. Don’t throw this away! You can use it later to make schmaltz and gribenes. I love to crunch on the gribenes, they are a great salty snack, similar to pork rinds.

Once you have the bird trimmed, take a healthy handful of kosher salt, and exfoliate the skin and cavity. This will remove any feather remnants, as well as acting as a quick brine. Rinse the salt off with cold water, and then place the duck on a roasting rack in a pan, breast side down.

Though Duck L’Orange evokes visions of dated French restaurants from the 1970’s and 80’s, I do like the flavor combination of citrus and duck. The sweet acidity balances out the fatty gaminess of the duck. I have made roasted duck with several different marinades, but this one is still my favorite. In a pyrex measuring cup, I juice one orange, and add in 2 tbsp of maple syrup and 1/3 cup boiling water and mix well. I’ve also done this with honey, and it tastes delicious, but slightly sweeter. Either are good options. I then take the orange that has just been juiced, and stuff it in the cavity of the duck with several sprigs of rosemary. We get these gorgeous long rosemary branches from our local market, so I only use 3. If you are using smaller rosemary sprigs, I’d probably use about  6-8 sprigs.

In the bottom of the roasting pan, I will then throw in our “sides”. Normally, I will cube 1-2 sweet potatoes, to toss in the bottom of the pan. For veggies, I like to halve brussel sprouts, or use baby carrots. These veggies are a bit firmer, so they won’t disintegrate as the duck roasts. Plus, they taste fantastic coated in a light layer of duck fat.

The Method for this Madness

Cooking the duck is next. Since we are aiming for a shorter cook time, the oven gets cranked up to 450 degrees. I like to lower the top rack a bit before turning the oven on, so the bird won’t be too close to the top (and burn). Once the oven has reached temperature, I put about 2/3 cup of water in the bottom of the roasting dish with the veggies, and coat the duck in 1/3 of the glaze (using a basting brush). Next, place it in the oven to roast for 30 minutes. 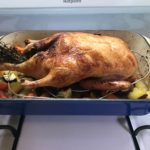 After 30 minutes, carefully remove the duck from the oven. At this point you should see the skin is a nice golden brown, and very crispy. Using a sharp knife, or fork prongs, pierce the top and sides of the bird. You will see that these punctures have released a subcutaneous sea of melted fat that is now dripping down the sides of the bird. All of that rendered fat is now dripping into the bottom of your roasting pan, flavoring your veggies.

Check on your veggies, and give them a bit of a toss so they are getting evenly cooked. If the bottom of the roasting pan is looking dry, and like the veggies are burning, add in a bit more water. Don’t add too much! Water should never come close to touching the duck. Next, using tongs, carefully flip the bird, so the breast side is up. Use half of the remaining glaze, and and brush it over the top and sides of the bird. Place back in the oven for 20 minutes. 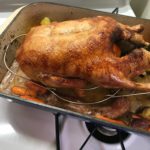 When the 20 minutes are up, remove the roasting pan from the oven again. Repeat the puncturing process to release the melted fat on the breast side of the duck, and all over the sides. Check the bottom of the pan again to see if it needs any more liquid. Give the veggies a little toss with spatula or tongs. Glaze the duck with the last of the maple citrus mixture, and put it back in the oven for another 10 minutes.

Carve the duck, and serve immediately. If there are any juices in the bottom of the roasting pan still, you can serve as an au jus.

Given the amount of liquid and cook time for this recipe, it is best to use firm veggies. I will typically cube 1-2 sweet potatoes, and then throw in either 1-cups of carrots, or brussel sprouts. If you decide on brussel sprouts, cut them in half before roasting. 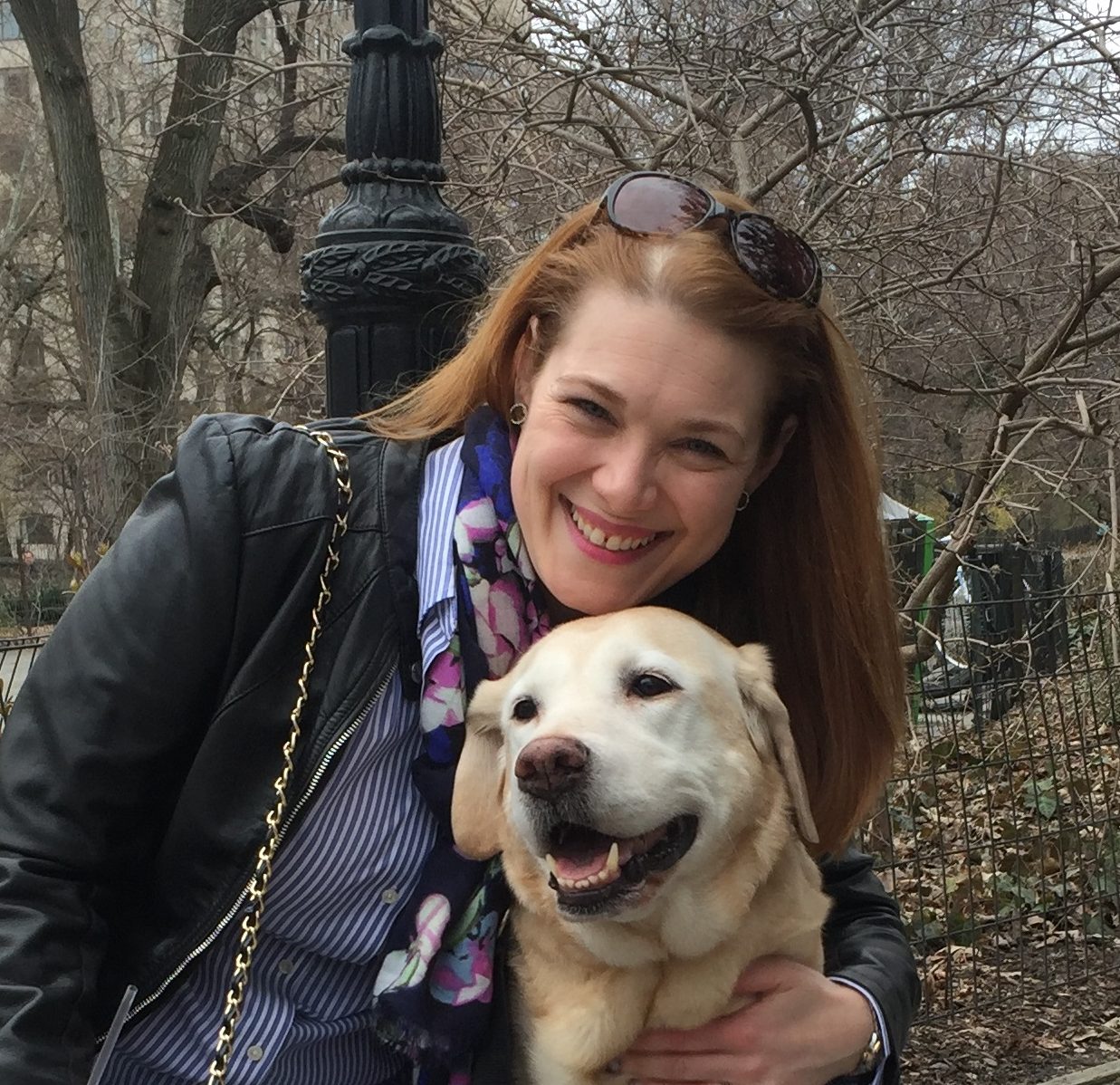